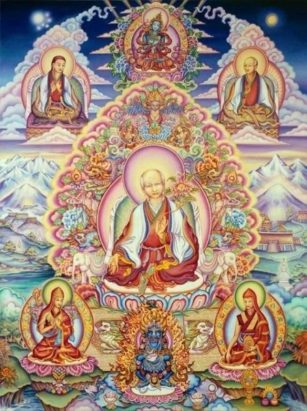 Brief Introduction to the Sakya Lineage

The Sakya Tradition—one of the major Tibetan Buddhist traditions—was founded in 1073 by Khön Konchok Gyalpo, who established the first monastery as the seat of Sakya tradition, at a place called “Sakya” in the region of the Ponpo Ri mountain range. Subsequently, the five Founding Masters of Sakya initiated the common and uncommon teachings and caused the teachings of Sakya including the auxiliary sciences to flourish. Since then, the lineage and its followers have been called “Sakyapa”.

The unbroken succession of lineage holders bear the three supreme names of ‘mtshan mchhog gsum ldan’, known as the Celestial Race, the Khön Clan and Sakya-pa. Through them, the great teachings of the Sakya Tradition are preserved and continue to flourish to the present day. The previous throne holder, His Holiness the 41st Sakya Trizin, Ngawang Kunga Thegchen Palbar Trinley Samphel Wangi Gyalpo, saw with his vast vision that in the current degenerate time it would be beneficial to change the throne holder succession system, even though this diverges from the established Sakya tradition, creating a new era.

Detailed History of the Sakya Tradition

The Sakya tradition is one of the four major religious traditions that existed in Tibet. It rose to play a significant role in the development and spread of the new Tantras that came to Tibet in the 11th century. During the 13th and 14th centuries, the holders of the Sakya tradition were also the principal political powers that ruled over Tibet . Although its political stature gradually declined over the centuries, emphasis on its unique religious traditions continued to be nurtured and sustained.

Consequently the Sakya tradition strengthened and flourished and produced many great and distinguished practitioners, saints, and scholars. The origins of the Sakya tradition are closely connected with the ancestral lineage of the Khön family: a family which itself originated from celestial beings. Beginning with Khön Konchok Gyalpo (1034-1102), the founder of the Sakya tradition, the lineage continues to be unbroken to this day.

The Five Patriarchs of the Sakya Traditon

The Six Ornaments of Tibet

Following the Five Patriarchs, were the Six Ornaments of Tibet who were also renowned spiritual masters of the Sakya tradition.

The Six Ornaments of Tibet comprised of Yakton Sengey Phel and Rongton Sheja Künrig who were reputed for their authority on the teachings of the Sutra; Ngorchen Kunga Zangpo and Zongpa Kunga Namgyal, who were highly learned in the Tantras; Gorampo Sonam Sengey and Shakya Chogden who were highly learned in both the Sutras and Tantras. It was Gorampa Sonam Sengey who also introduced the formal study of logic in the Sakya tradition.

Not unlike the other traditions of Tibetan Buddhism, a number of sub traditions gradually emerged within the main Sakya tradition. The lineages of teachings within the discipline instituted by Ngorchen Kunga Zangpo (1382-1457) and the successive masters of this discipline, namely Konchok Lhundrup, Thartse Namkha Palsang and Drubkhang Palden Dhondup have come to be known as the Ngor lineage. The lineage of Tsarchen Losel Gyatso (1502-1556), known as the Whispered Lineage of Tsar, includes the secret doctrines of the greater or lesser Mahakala, Vajrayogini, Dzambala and others, and is knows as the Tsar tradition. Another important tradition that arose was the Dzongpa tradition founded by Dzongpa Kuna Namgyal (1432-1496). To use a simple illustration, the Sakya School of the divine Khön lineage might represent the main trunk of a tree, from which the Ngorpa and Tsarpa schools branch out in different directions, but essentially remain connected at the source.

The teaching and practice that is the essence of the Sakya tradition is called “Lamdre (Lam/bras),” or “The Path and its Fruit.” Fundamentally, the philosophical viewpoint expressed in “The Path and its Fruit,” is the “Non differentiation of Samsara and Nirvana.” According to this view, an individual cannot attain Nirvana or cyclic existence; because the mind is the root of both Samara and Nirvana. When the mind is obscured, it takes the form of Samsara and when the mind is freed of obstructions, it takes the form of Nirvana. The ultimate reality is that a person must strive to realize this fundamental inseparability through mediation.

This practice ultimately leads a practitioner to the state of the Hevajra deity, one of the principal deities of the Sakya tradition. The profound teaching itself originated from the India teachers Virupa, Avadhuti, Gayadhara and Shakyamitra, and was first brought to Tibet by Drogmi Lotsawa, who also rendered it into Tibetan. Although, during the time of Müchen Sempa Chenpo Konchok Gyaltsen, a disciple of Ngorchen Kunga Zangpo (1382-1457), the transmission of “The Path and its Fruit” developed into two sub traditions: “The Explanation for Private Disciples (sLobbshad)” and that of “The Explanation for Assemblies (Tshogbshad),” ever since the Lamdre teaching was first brought into Tibet, it has been passed down to this day through an unbroken lineage of masters up to His Holiness the 41st Sakya Trizin, the present throne holder of the Sakya tradition.

The political importance and dominance of Tibet by the Sakyapas started in the early 13th century. In 1240 the grandson of Genghis Khan by the name of Prince Godan ordered troops against the Tibetans. In the course of his campaign he was also looking for an outstanding Buddhist master. His commanders informed him that there were three famous lamas in Tibet . The Lama of Drikhung monastery was the wealthiest; the lama of Taklung monastery was the most sociable; and the lama of Sakya monastery was the most religious. Prince Godan then sent a letter and presents to the Sakya lama, Kunga Gyaltsen, requesting his presence in his court.

The invitation was accepted by Kunga Gyaltsen (1182-1251), who was also called Sakya Pandita, because of his knowledge of Sanskrit. He departed Sakya in the year 1244 for the Kokonor region where Prince Godan had his camp. Sakya Pandita took with him on the journey two of his nephews, the ten year-old Phagpa Lodro Gyaltsen and the six year-old Drogon Chakna. The Mongol representatives of Godan accompanied the party. Sakya Pandita gave many sermons along the way to Kokonor region and the journey was taking a long time, so he sent his nephews on ahead. By the time he arrived in the camp of Godan in 1247, the two young Tibetans had won the hearts of the Mongols. According to Tibetan accounts, Sakya Pandita met Prince Godan at Lan-chow, the capitalKansu .

Sakya Pandita instructed Godan in the teachings of the Buddha and even persuaded him from drowning a large number of Chinese in the rivers. This was done in order to reduce the population since a large Chinese population was always a threat to the rule of Prince Godan, himself a Mongolian. The practice was stopped when Sakya Pandita convinced Godan that it was against the Buddhist doctrine to do so. Sakya Pandita remained in Godan’s court for several years during which he gave many religious instructions to the Prince and his followers. In return, Prince Godan invested Sakya Pandita with the temporal authority over the thirteen myriaches of centralTibet as a tribute and offering for the teachings he received. For the Tibetans, he sent a book he had written. It was titled “Thub-pai Gon-sal,” meaning “The Buddha’s Intent.” Knowing he did not have long to live, he left his book as a legacy to this country.

In 1251, Sakya Pandita passed away in Lan-chou, seventy years of age. Prince Godan died not long after Sakya Pandita and was succeeded by prince Kublai, who is also known as Sechen to the Tibetans. In 1253, Kublai invited the nineteen year-old Chogyal Phagpa to his court and was much impressed with the young monk’s learning, displayed in his intelligent answers to a number of difficult questions. Kublai then asked for religious instructions; but the young Sakya lama told him that before he could receive such teachings, Kublai would have to prostrate himself before Phagpa as his religious teacher whenever they met and to place him before or above, whenever they traveled or sat. Kublai replied that he could not do so in public, as it would involve a loss of prestige and therefore weaken his authority. Some sources say that Kublai consented to occupying a lower seat than his lama when receiving teachings and an equal seat when dealing with matters concerning the government.

According to tradition, Phagpa bestowed initiations and teachings to Kublai and twenty-five of his ministers on three occasions. The first earned him the spiritual and temporal authority over the thirteen myriaches (Trikhor Chusum) of central Tibet . After the second, he was given a relic of the Buddha and invested with the supreme authority over the three regions of Tibet (chol-ska-sum). When Kublai became Khan in 1260, Phagpa was given the title of “Tishri,” meaning “Imperial Preceptor,” after the third initiation and teachings. In the same year, Phagpa was requested to conduct and preside over the enthronement ceremony of the new Khan. It is said that the lama-patron relationship between the Mongol Khan and the Tibetan lama was like “the sun and the moon in the sky.”

In 1265 Phagpa returned to Tibet for the first time. At Sakya he was given a rousing reception and honor by the Tibetan chieftains, who came to pay homage to him. Chogyal Phagpa introduced a centralized system of administration in Tibet . An official known as the “Ponchen,” who maintained his office in Sakya, carried out the actual administration. Under this official were the thirteen Tripons, who directly ruled in their own myriachy. The “Ponchen” appointed by Phagpa was named Ponchen Shakya Sangpo. In this way Chogyal Phagpa united Tibet under one Government and streamlined the administration.

At the invitation of Kublai Khan, in 1268 Chogyal Phagpa returned to the Khan’s court in Mongolia . He presented to the Khan a new script he had devised for the Mongolian language. Kublai was pleased and the new writing system, which would become known as “Phagpa Script” was put into official use. Phagpa was again honored by Khan, who bestowed on him the title of “Prince of Indian Deities,” “Miraculous Divine Lord Under the Sky and Above the Earth,” “Creator of the Script,” “Messenger of Peace throughout the World,” and “Possessor of the Five Higher Sciences.” Phagpa passed away in Sakya in 1280.

In the year of Phagpa’s death, Kublai Khan had finally conquered all of China , and had ascended the throne as the emperor of China . Dharmapala, Drogon Chakna’s son was appointed “Tishri” in 1282. In 1287, he set out for Tibet but died during the long journey. In the year 1295 the great Kublai Khan also died. Throughout the period of Sakya Pandita and later, the actual administration of Tibetremained with the Tibetans. The relationship between Mongol rulers and the Tibetan lamas cannot be defined in western political terms. An insight into the attitude of the Khan is shown by the lengths to which he went to please Chogyal Phagpa, whom he acknowledged and supported both as his spiritual teacher and as a supreme authority in Tibet . A unique patron-lama relationship was established between the Tibetans and the Mongols based upon mutual cooperation and respect.

After the death of Kublai Khan in 1295, the power of the Mongols began to decline to China. In 1305 Dagnyi Zangpo Pal came to the throne of Sakya and reigned for thirteen years. The political system carried out during Chogyal Phagpa’s period was continued with the actual powers held by Ponchen and the Tripons. During the administration of Ponchen Gawa Zangpo and the reign of ruling lama, Sonam Gyaltsen, the political strength of the Sakya began to wane in Tibet . Most of the later Sakya lamas concentrated more on their religious duties and left the entire political administration to the Ponchens.